Artificial Sweeteners Could Have A Positive Impact On Your Dental Health 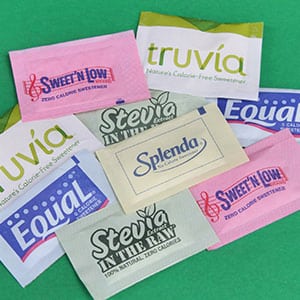 Cutting back on table sugar is a good thing, both for your body in general and your mouth in particular. The bacteria that cause dental disease thrive on leftover sugar in the mouth, so reducing sugar in your diet could also help reduce the growth of bacteria that cause tooth decay and periodontal (gum) disease.

But eliminating sugar doesn’t necessarily eliminate your “sweet tooth”—that yen many of us have for this particular carbohydrate. That’s why many people turn to artificial sweeteners, which don’t have the same effect on our mouth biome as sugar (and many of which have little to no calories for those watching their weight).

But are they safe? According to the U.S. Food and Drug Administration (FDA), yes. After extensive testing, the FDA has approved 6 sweeteners for food consumption: acesulfame K, saccharin, aspartame, neotame, sucralose and rebaudioside A. These are also known as high-intensity sweeteners because they’re many times sweeter than equal amounts of sugar.

All of these except rebaudioside A (derived from the stevia plant) are man-made chemical compounds. But even with their “artificial” tag, there is no significant evidence to date that they’re harmful to long-term health.

One exception, though, is a rare genetic condition some people may have that causes their bodies to not be able to process aspartame. Otherwise, there’s wide consensus among health experts that artificial sweeteners are safe — and among dentists they’re considered beneficial because they help reduce sugar consumption and decrease disease risk.

Artificial sweeteners aren’t the only alternatives for satisfying our appetite for sweetness. There’s also another class of alcohol-based sugars, the most prominent being xylitol. You’ll often find xylitol in gums, candies or mints. Dentists recommend xylitol-sweetened products not only because their use displaces sugar consumption, but studies have shown xylitol inhibits oral bacterial growth.

Deciding which sweetener to use often comes down to taste and the intended purpose. Some sweeteners like aspartame, for example, aren’t suitable for cooking, whereas saccharin is, especially for baking. But whichever sweetener you use, you’ll be doing your body and your mouth a favor if it helps you reduce your sugar consumption.

If you would like more information on alternatives to sugar, please contact us or schedule an appointment for a consultation. You can also learn more about this topic by reading the Dear Doctor magazine article “Artificial Sweeteners.”