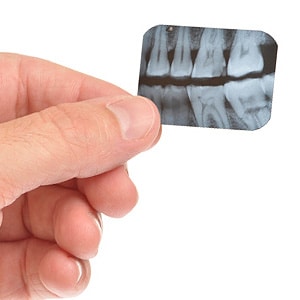 One of the most widely used forms of dental imaging is the bitewing x-ray. So called because of the shape of the device that holds the exposable film a patient clenches between their back teeth, the bitewing x-ray is an effective means for detecting the earliest stages of tooth decay.

These early signs are small lesions on a tooth surface caused by mineral loss in the enamel. While we can identify them on front teeth through visual examination or bright lighting, they’re nearly impossible to see on the biting surfaces of back teeth. The bitewing x-ray solves this problem.

During the procedure, a narrow beam of x-rays is directed at the back teeth area. Since X-rays can transmit through solid matter, they pass through the teeth and gums to expose the film attached to the bitewing assembly.

X-rays pass through matter at different rates depending on the density of the tissue — a slower rate for harder tissues like teeth and bone and a faster rate for soft tissues like the gums. As a result, x-rays through teeth expose less of the film and appear as a lighter image than the gums. This difference is so precise even a tooth’s softer dentin appears slighter darker than its harder outer enamel.

This precision helps us identify decay lesions. Because the lesions on the enamel are less dense than the normal enamel, they’ll appear as dark spots. By detecting them at this stage we have a better chance for reversing the effects of decay or at least minimizing damage that’s already occurred.

Because x-rays emit radiation, there’s a natural concern about over-exposure and we go to great lengths to reduce it. Children may undergo a bitewing x-ray twice a year for developing teeth, while adults with healthy teeth are typically x-rayed just once a year. Advances in digital film and other technology have also helped lower the exposure rate.

Today’s standard 4-film bitewing x-ray produces about four days worth of what we receive on average from normal background radiation, so the health risk is quite negligible. The benefit, on the other hand, is much greater — the early detection of tooth decay could ultimately save a tooth.

If you would like more information on the use of bitewing x-rays in dental care, please contact us or schedule an appointment for a consultation.