Drawing Impacted Teeth Into The Open Can Restore A Smile 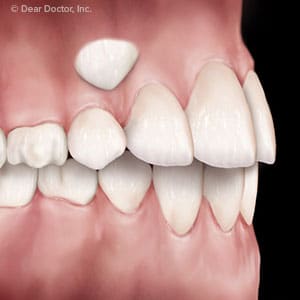 You don’t have to be a dental professional to appreciate a beautiful smile. Likewise, you’ll also know when something’s not quite right with one.

Such can be the case when a tooth fails to erupt properly, causing most or all of the crown to remain below the gum line, a condition known as impaction. Upper canines (or “eyeteeth,” for their location in the arch under the eyes) are especially susceptible to impaction: located on either side of the lateral incisors, which are on either side of the central incisors (the two center front teeth).

The upper canines are important both for function and appearance. Working with their lower counterparts they help cut through food as we chew, so you lose some of that efficiency when they don’t erupt properly. Impacted teeth are susceptible to abscesses and cysts, and can impinge upon and damage the roots of other teeth. And just as importantly, their absence also disrupts the smile as nearby teeth tend to move or “drift” toward the open space.

Rather than remove the impacted canines as is often done with back teeth, it may be more advantageous for both function and appearance to “coax” them into full eruption. This requires first pinpointing their exact location below the gums using x-rays or cone beam 3-D imaging.

If the teeth are in reasonably good position we must first prepare them for orthodontic treatment by surgically exposing the crown from the gums and bonding a small bracket to it. We then attach a small gold chain to the bracket that extends outside of the gums when we suture them back into place. The chain is attached to orthodontic hardware that exerts pressure on the impacted tooth for several months to “pull” it out into the arch.

This procedure has the best chance of success if undertaken before the end of jaw development in early adulthood. Otherwise, it may be better to remove the impacted canines and replace them with dental implants, followed by orthodontic treatment of other teeth to restore their proper position and bite relationships. In either case, your impacted upper canines don’t have to be a problem — we can restore both your mouth function and your smile.

If you would like more information on impacted teeth and treatment options, please contact us or schedule an appointment for a consultation. You can also learn more about this topic by reading the Dear Doctor magazine article “Exposing Impacted Canines.”