The Real Truth Behind Ed Helms’ Missing Tooth In “The Hangover” 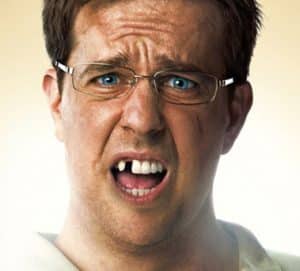 Ed Helms is best known for his role as the self-absorbed, Ivy League sales rep, Andy Bernard, on television’s The Office. But to millions of fans he’s also Stu, a member of a bachelor trip to Las Vegas in the 2009 movie The Hangover. In it, Stu and his friends wake up from a wild night on the Strip to find some things missing: the groom-to-be, their memories and, for Stu, a front tooth.

In reality, the missing tooth gag wasn’t a Hollywood makeup or CGI (computer-generated imagery) trick—it was Ed Helm’s actual missing tooth. According to Helms, the front tooth in question never developed and he had obtained a dental implant to replace it. He had the implant crown removed for the Hangover movie and then replaced after filming.

Helms’ dental situation isn’t that unusual. Although most of the 170 million-plus teeth missing from Americans’ mouths are due to disease or trauma, a few happened because the teeth never formed. While most of these congenitally missing teeth are in the back of the mouth, a few, as in Helms’ case, involve front teeth in the “smile zone,” which can profoundly affect appearance.

If the missing tooth happens to be one or both of the lateral incisors (on either side of the centermost teeth), it could be possible to move the canine teeth (the pointy ones, also called eye teeth) to fill the gap. This technique, known as canine substitution, may also require further modification—either by softening the canines’ pointed tips, crowning them or applying veneers—to help the repositioned teeth look more natural.

The optimal solution, though, is to replace a missing tooth with a dental implant which then has a lifelike crown attached to it, as Ed Helms did to get his winning smile. Implant-supported replacement teeth are closest to natural teeth in terms of both appearance and function. Implants, though, shouldn’t be placed until the jaw has fully developed, usually in early adulthood. A younger person may need a temporary restoration like a bonded bridge or a partial denture until they’re ready for an implant.

Whatever the method, there’s an effective way to restore missing teeth. Seeing us for an initial exam is the first step toward your own winning smile.

If you would like more information about restoring missing teeth, please contact us or schedule a consultation. To learn more, read the Dear Doctor magazine article “Dental Implants.”